The average annual processing capacity of the five production units is about five million tons of oil shale, 70% of which is provided by the Petroter plants.

How does the Petroter technology work?

Developed and patented by VKG’s own engineers, the Petroter oil shale processing technology has been used by the group since 2009. A decade of use has proven its robustness and efficiency. In 2018, for example, the three Petroter plants were active for a total of 905 days and their average net efficiency indicator was 90.5%.

The Petroter technology is based on a thermal processing (pyrolysis) process, using a mixture of fine-grained oil shale (0–25 mm fraction) and a solid heat carrier, i.e. ash. Oil shale and hot ash are mixed in a rotating reactor in the absence of air, the mixture is heated and, at around 450–500 °C, the organic matter in oil shale begins to separate out as liquids and gases. The vapour-gas mixture thus obtained is refined from ash and mechanical impurities and distilled into liquid products and gas with a high heating value. The liquid products are forwarded to the loading department as finished products or for further processing. The gases are transmitted to the thermal power station for heat and power production. The steam is used for power production at the thermal power station. The by-products of this process include phenol water, flue gases and ash from thermal processing.

How does the Kiviter technology work?

The production is based on the process of pyrolysis. The heat required for pyrolysis is obtained by burning a part of the gas formed during pyrolysis. The process takes place in a vertical retort with a cross-sectional heat carrier. The Kiviter technology for oil shale thermal processing uses a 25–125 mm fraction of oil shale, which is fed into the retort from above. The oil shale moves from the loading box through a pyrolysis chamber, and mixes with a perpendicular flow of flue gases produced by burning the producer gas.

The oil and water vapours and gas produced in the course of pyrolysis exit the top of the generator into a condensation unit, where they condense into oil and water. The crude shale oil is conveyed into the preparation and then distillation units, and the wastewater into the phenol recovery unit. The producer gas is partially used to produce the heat necessary for the process and partially directed to a thermal power plant for heat and power production. The semi-coke produced in the pyrolysis process is discharged through the retort base and stored in a semi-coke storage facility.

A by-product of the Kiviter technology is phenolic water, from which we refine valuable high-purity (up to 99.8%) chemicals. 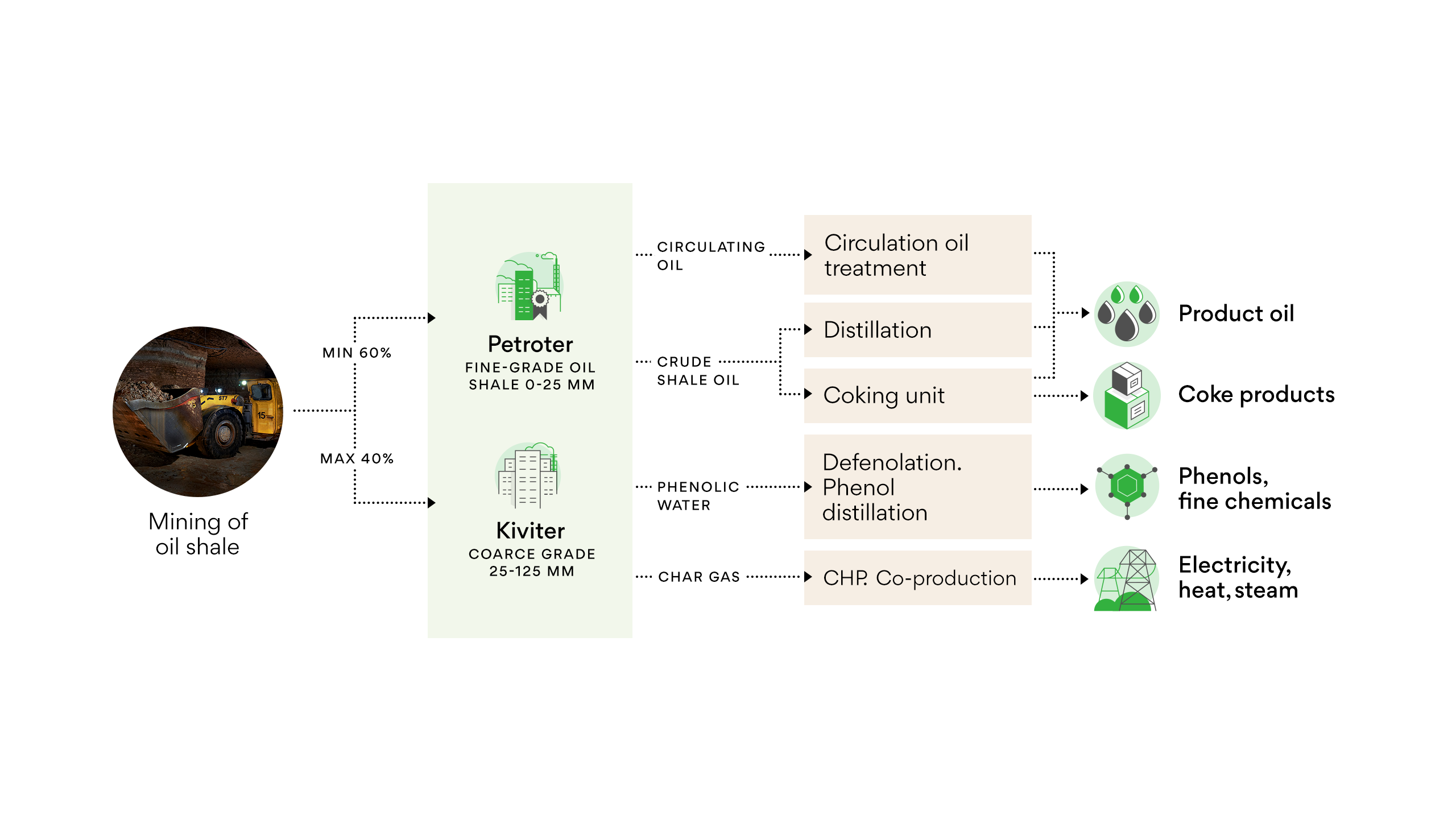 Our century-long experience in refining Estonian oil shale, along with the know-how we have developed in maximising the amount of oil and valuable by-products, is unique worldwide. Our oil shale plants are robust and efficient, as evidenced by our production statistics and minimal maintenance downtime